The world’s biggest sandcastle is to be found in Blokhus

A groundbreaking project increases attention on culture and experiences in North Jutland, Denmark.

Several actors have made a groundbreaking project in the destination of Blokhus in the northern part of Denmark. They are attempting to build the world’s biggest sandcastle. When the hopefully record-breaking sculpture, placed on Skulpturparken Blokhus’ parking lot, is fully constructed, it will measure a height of at least 20 meters. Further, the plinth width will measure no less than 30 meters. This both means a attempt of a new world record, and hopefully a spot in Guinness Word of Records, as the sandcastle in Blokhus will surpass the previous record – an 18-meter-high sandcastle made in Germany. “We have the best sand in the world – If we can’t set a new world record, nobody can,” explains John Andersen, owner and CEO of Skulpturparken Blokhus. 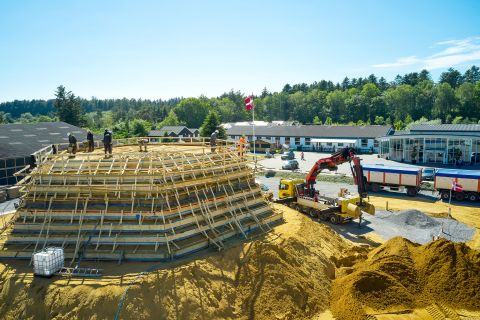 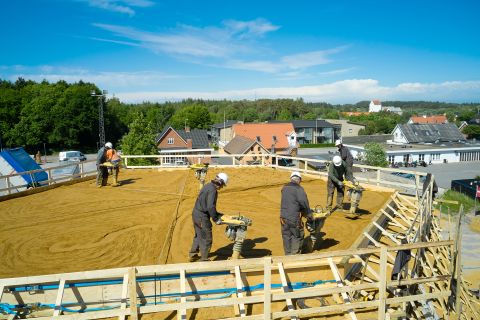 Landmarks integrated in the sculpture

“We are launching this extraordinary project as we together can ensure growth, development and focus on art and culture in Blokhus, Jammerbugten, North Jutland and Denmark in general. Therefore, we integrate well-known local landmarks from Blokhus, Jammerbugten, and North Jutland in the sculpture such as fishing boats from Thorupstrand, Holiday homes along the West coast and the famous sea mark in Blokhus. Even though we do attract a lot of tourists in Blokhus during summer, we are making this project as we all need to get more spectacular experiences after these Covid-19-times. We need something impressive, and something that will make us smile,” says John Andersen.

Destination Nordvestkysten and Jammerbugt Kommune have already agreed as sponsors in the project. “Action beats everything. What we witness here is fantastic,” says mayor in Jammerbugt Kommune, Morgens Chr. Gade. “To build attempt to build the world’s biggest sandcastle is an impressive initiative benefiting everyone in this area, which is a gem in Danish tourism. Here are already a lot of great experiences and events – Now one more is to come. The sandcastle is for everyone, and I can’t imagine a better place to break a world record than in Skulpturparken,” he says.

A team consisting of 10 stompers are now in the process of stomping the sand to make the best working conditions for some of the world’s best sand sculptors, who will work on the record-breaking sand sculpture from the 3rd of June. Thus, it does not only become a work of art, but a unique opportunity to see the art unfold as well.
The initiative is also welcomed by Peter Krusborg, CEO in Destination Nordvestkysten. “When we as a destination looks at tourism, it is crucial that we have strong business actors. Here, John Andersen’s project goes beyond any imagination,” he explains.

“This project will boost our destination to another level during summer and fall. It will generate a lot of traffic and interest, and it will not only benefit Blokhus, but the whole coastal area. When looking at similar things made elsewhere, we are talking about an international attention on a completely different level. This level of attention belongs to the rarities,” emphasizes Peter Krusborg.

Another strong force associated to the 20 meter-high sandcastle is Karsten Nielsen, leader of Sand Sculpture Festival in Søndervig, who is in charge of constructing the sculpture.

Facts about the project: